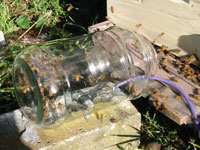 “Clear Dawn” was inspired by my experiences recording birds in Aotearoa/New Zealand 2004-2005, and in coming together with a wide variety of people whom I met along the way. A traditional Mäori concept shared with me by Gary Millan while in Paraparaumu seemed to reflect the essence of my experience while spending focused, long periods of time on the land, whether recording or just being. It roughly translates into English as "that which is just beyond our perception”. This idea is a part of The Mäori legend identifying three concepts of knowledge contained in Ngä kete o te Wänanga (Baskets of Knowledge). According to the legend, the first basket contains ritual chants and prayers, the second basket contains all practical knowledge, and the third basket contains the sources of good and evil. "That which is just beyond our perception" is a concept from the 3rd Basket. While I experimented with and transformed my field recordings into new sonic expressions, I was inspired by this concept and also by the poems "The Long Dream of Waking" and "A Short Dream of Waking", penned in 1948 by Leonard Charles Huia Lye (July 5, 1901 - May 15, 1980), a New Zealand sculptor, artist, writer and film-maker (reprinted, below).

“Clear Dawn” features audio from recordings of birds, mostly at or near dawn, and of bees gathering in jugs and bottles, which I made while in residence at Radio New Zealand / "RPM" while in the field at Paparoa National Park on the South Island West coast, at Kapiti Island off the North Island West coast, and with the assistance of Frank Lindsay at Lindsay’s Apiaries in Johnsonville near Wellington. The sounds of the shô (Japanese mouth-organ), de-tuned and played by myself with some filtering later applied, are elemental as well. An instrument of mysterious and ethereal beauty, the shô has historically been associated in ancient China and Japan as embodying the Phoenix (an auspicious mythical bird) in form and sound, and is still used today in Japan where, among other things, it accompanies deities in their journey to and from the spirit world during Shinto ceremonies. Underpinning these sounds are modulated frogs which were recorded at dusk in Singapore while I was en route from Aotearoa to Canada, and, sound derived from recordings I made while traveling by train from Montréal to Toronto. Clear Dawn is a combination of pre-determined, carefully constructed materials, chance operations which involved libraries of sampled sound chosen and mixed somewhat randomly by computer, and long stretches of ambient recordings.

THE LONG DREAM OF WAKING

Of thinking no length
I stand now in a long dream of doing
I stood then in a short dream of knowing
It was I black, sun white, sea silk with sky.
I stand now in that new day on the world
Up out of its water
Its light through my teeth,
My solid eyes dreaming
My mind steeped in sheen;
I stand now on its horizon,
My shadow its centre
In the waters of sun.

A SHORT DREAM OF KNOWING

In the long dream of waking
Of thinking no length
I stand now in a long dream of doing
I stood then in a short dream of knowing
It was I black
Sun white
Sea soaked with sky
I stood still in that new day on the world
Up out of its water
Its light through my teeth
My wakened eyes dreaming
My mind steeped in sheen
I know now an endless horizon
My shadow its centre
In the waters of the sun.

This piece is suitable in a concert setting. It is also suitable as a sound piece on continuous play in a gallery setting. In the gallery setting, the sound heard sitting directly in front of loudspeakers (in the usual manner) is of course effective, however, the spill-over of sound into adjacent environments is also quite beautiful.

In a gallery setting, regular loudspeakers and/or multiple transducers (speaker drivers) could be affixed (bolted) to the walls, thereby making the walls themselves function as loudspeakers.

I recommend previewing this both sitting directly in front of loudspeakers and listening from adjacent rooms. Audio level at the beginning of the piece should be quite quiet.

Currently, “Clear Dawn” is in stereo format. The work was orignigally constructed in 8 discreet channels, using Protools Free, in a 16-bit format. It is possible to create a version of the piece where all 8 tracks are distinct and spacialized, in 4 stereo pairs, as the distinct audio materials (e.g. shoh/mouth-organ, bees, birds, water, some crickets, some of the frogs) are mostly on separate tracks. However, much of the polyphonic bird-trainsqueak-frog material was created in stereo, though this accounts for perhaps 30 percent of the work. Creating a multi-channel version would require re-recording as well as composing a spacialization. This would require a bit of work.

That said, to do an easy spacialization, the tracks could be isolated simply as they are and a limited spacialization created from that. In isolating the tracks, the technical note, below, also applies, being that doing a straight 16-bit to 16-bit bounce would likely result in loss of ‘presence’.

This version of Clear Dawn was created in 16-bit resolution, 8 tracks, which presented various problems with some audio levels peaking in the mix-down stage. It was mixed down via going back and forth from 16-bit to higher resolutions and back to 16-bit with the assistance of Ted Phillips in Toronto, July, 2005. This audio work will be somewhat modified and remixed from its original version to produce a higher sound quality version in the upcoming year.